The Museum of Modern Art in New York 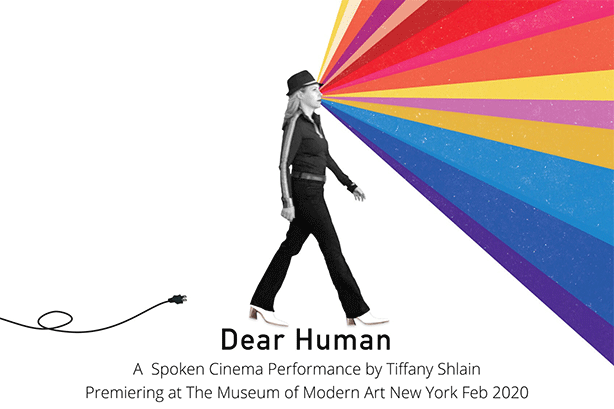 This live cinematic essay performance takes the audience on a journey across the past, present, and future of the relationship between humanity and technology. Incorporating live narration, moving images, original animations, an evocative soundscape, and audience engagement, Dear Human invites the audience to investigate how technology both amplifies and amputates our humanity and how to make sure we stay human in this 24/7 culture.

Dear Human is inspired by Tiffany's new book 24/6: The Power of Unplugging One Day a Week.

"Always a momentous occasion for lovers of nonfiction cinema, Doc Fortnight celebrates its 19th edition with some of the most formally innovative, thought-provoking documentary and hybrid films being made in the world today. This year’s edition features 12 world premieres, 17 North American premieres, and 14 US premieres from 38 countries. Many of these films have won top prizes at other major international festivals, including Cannes, Sundance, Berlin, and Locarno."

Tiffany Shlain is a filmmaker, speaker, and author who merges all of these forms in an experience she calls Spoken Cinema where she live-narrates her cinematic essays on stage in front of moving images and a soundtrack. Tiffany’s films and work have received over 80 awards and distinctions including an Emmy nomination, premieres at the Sundance Film Festival, and a Disruptive Innovation Award from Tribeca Film Festival. Her films have been shown by the US State Department to represent America at embassies around the globe. NPR named her UC Berkeley commencement address to its list of best commencement speeches, and the Albert Einstein Foundation selected Tiffany for its book and initiative, "Genius: 100 Visions of the Future." She speaks and performs worldwide exploring the relationship between technology and humanity.

Sawyer Steele is an Emmy-nominated producer and co-founder of Let it Ripple. He has co-written, co-produced, and co-edited several award-winning films including Connected: An Autoblogography about Love, Death, and Technology; which premiered at Sundance. He was Voice Over Director for the award-winning Sundance film The Royal Road. He produced and co-wrote the Emmy-nominated AOL Original series, The Future Starts Here, which includes an episode TransBoom, where he shares his experience being transgender and his thoughts around the past, present, and future of being trans. He co-founded Character Day, an annual day that last year had over 200,000 events in 125 countries. Sawyer was born and raised in New England and lives in Oakland, CA.

Meiyin Wang is a director, producer and curator of live performance, specializing in cross disciplinary contemporary performance. She was the Andrew W. Mellon Creative Fellowship at the University of Washington from 2016-2019. She was the Festival Director of La Jolla Playhouse’s Without Walls, a site-specific city-wide performance festival in San Diego; the Co-Director of Under the Radar Festival at The Public. She was the curator of the Park Avenue Armory’s artist residency series and the lead curator of Arts Emerson’s TNT Festival. Her directing work has been seen at La MaMa, American Repertory Theater, The Public Theater, Museum of Chinese in America, Brava Theater Center and other non-traditional performance sites. She studied under master directors Robert Woodruff and Anne Bogart and holds an MFA in Directing from Columbia University. She travels actively to research new performance globally and has served on numerous adjudication panels including Herb Alpert Award,, NEA, NYFA, Jerome Foundation, MAP Fund, and Sundance Institute, and also served on the board of Theater Communications Group.  Meiyin was born and raised in Singapore.

"Tiffany Shlain's work is part art installation, part documentary, a video essay and a handful of one woman show. Take the strengths of Barbara Kopple, Guillermo Gomez Pena, Sandra Bernhardt and Thom Anderson and have them throw down over a late breakfast. You've got something close to her luminiously thoughtful wonders that take you somewhere you've seen before but also wish could be."

"Always a momentous occasion for lovers of nonfiction cinema, Doc Fortnight celebrates its 19th edition with some of the most formally innovative, thought-provoking documentary and hybrid films being made in the world today. This year’s edition features 12 world premieres, 17 North American premieres, and 14 US premieres from 38 countries. Many of these films have won top prizes at other major international festivals, including Cannes, Sundance, Berlin, and Locarno."