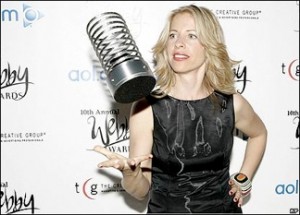 20 years ago, Tiffany Shlain founded The Webby Awards, the leading international honors for websites. As business leader and creative director for nearly a decade, Tiffany Shlain along with Maya Draisin and hundreds of others built The Webby Awards into a global institution and industry bellwether, attracting thousands of entries from more than 40 countries and all 50 states.

From the beginning, Tiffany was always interested in honoring the best of the internet while also playing with the award show model. In 1996, she was hired by Greg Mason, the publisher of The Web Magazine, an IDG publication, to produce the first Webby Awards, an idea which was initially brought to IDG by Erik Nelson, the Executive Producer of The Discovery Channel’s then series Cyberlife. From it’s inception, Tiffany instituted a five-word speech rule, brought on great companies like Pricewaterhouse-Coopers, Intel, Audi, and collaborated with artists, performers, and made original short films for the sold out 3000 person events. She brought in eclectic roster of guests to the awards shows that has included Al Gore, Prince, internet pioneer Vinton Cerf, journalist Thomas L. Friedman, Google Founders, Ariana Huffington and artist Bill Viola. In 1998, Tiffany co-founded The International Academy of Digital Arts & Sciences with Maya Draisin and Spencer Ante which today has over 1000 members and serves as The Webbys’ judging body.

After a decade devoting her time building The Webby Awards, she brought in Recognition Media to run The Webby Awards. Today she focuses her time exclusively on her filmmaking and lecturing, and as Director of The Moxie Institute. Her work merges the worlds of film, the Internet, and social change. Each year, they receive nearly 13,000 entries from all 50 states and over 60 countries worldwide. The Webby Awards is presented by The International Academy of Digital Arts and Sciences in New York City every year.

CNET recently asked Tiffany for a first person account on her experience founding The Webbys with thoughts on how the world has changed for the web and filmmaking 20 years out. You can read it here.

The History of the Webby Awards