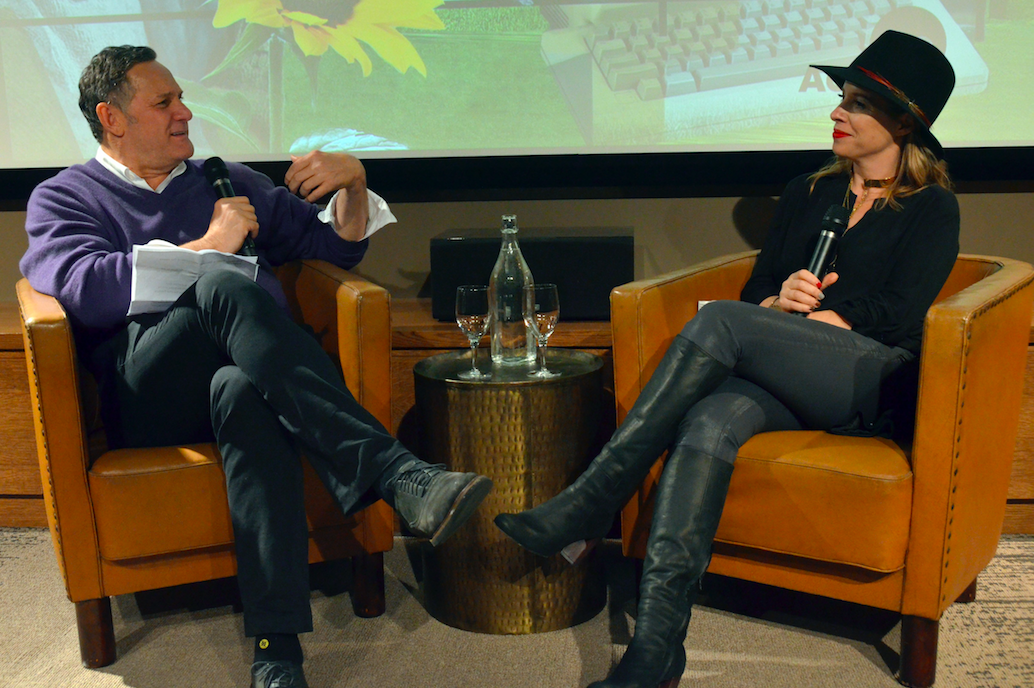 “Tiffany Shlain demonstrates, with lyrical simplicity, our interdependence on one another and the interconnectedness of humanity with all life on earth. With a tightly synchronized dance between her powerful images and insightful words — with humor, and with a creativity all her own, Tiffany illuminates the issues that affect us all — including environmental degradation, dizzying technological innovation and population growth — and helps us to understand our inter-relationship with the world in a way that is both freeing and inspiring. Throughout, she also presents and honors the deep wisdom of her late father, Leonard Shlain, reminding us of the deepest connections that breathe meaning into life.”

“Tiffany’s keynote address at The Women of Vision gala on negotiation struck a chord with our audience. She was one of the highest rated speakers we have ever had!”

“Director Tiffany Shlain delivered what was, improbably, both the most thought-provoking and the most personally emotional documentary of the whole festival. It will change your thinking, and what more can a documentary do?”

“Indeed, Shlain’s film does go wide — it’s like a rubber band stretching in multiple directions while not breaking. Examining the ways in which technology can productively unite our global citizenry, Connected details nothing less than the history of consciousness and its arrival within today’s always-on, hyper-wired mind.”

“A highly energized romp through a myriad of ideas about where the human race is headed.”

“We were absolutely thrilled with your presentation! We’ve heard it was the best luncheon speaker ever. We’ve received so much positive feedback, the organizers were beyond pleased.”

“You were fantastic! You had many important and insightful things to say on the subject of independent filmmakers using the internet to find audiences for their projects”

“These strong-voiced women are authors, researchers, mentors and activists: the kind of women who will shape America’s new century…”

“Tiffany is the Patron Saint of Short Filmmakers.”

“As founder of the Webbys, Shlain has pulled off an achievement that might seem to merit an award all of its own.”

“Tiffany was incredibly well received and of course we’d love to have her back. Many connections were made and she inspired a great deal of people to explore the limits of their creativity.”

“Thank you for helping make 2007 The Idea Festival a great success! Your talks and events were terrific!…tremendous feedback.”

“Tiffany Shlain is a tornado of enthusiasm.”

“Peter Coyote wryly narrates the cleverly written and edited piece that shares a similar smart tone with Shlain’s “Life, Liberty and the Pursuit of Happiness,” a meditation on a woman’s right to choose.”

“This child of the counterculture now helps to decide what’s hot in cyberspace.”

“Tiffany Shlain’s film, “Life, Liberty & The Pursuit of Happiness,” is a brilliantly woven pastiche that combines archival and original footage in a highly amusing but incisive examination of the fight for reproductive choice.”

“Short films typically give you a glance into the talent and capabilities of a filmmaker, and based on The Tribe, I’d say Director Tiffany Shlain is definitely one to watch.”

“As founder of the Webby Awards, an annual competition that determines the world’s best Web sites, Ms. Shlain has become one of the foremost arbiters of Internet taste and etiquette.”

– The Globe and Mail (Canada)

“The Tribe is a brilliant, irreverent, wry and buoyant film… The film is a stunning achievement and one of this year’s biggest and most worthy hits. I love this film and so do audiences.”

“With a combination of charm, persistence and an eye for what’s hot, Shlain has turned The Webby Awards into the internet equivalent of the Oscars.”

“Tiffany was amazing and the women would have done Q & A all night if the time allowed. Her DVD sales sold out in 15 minutes with many people still in line –the night was a major success!”