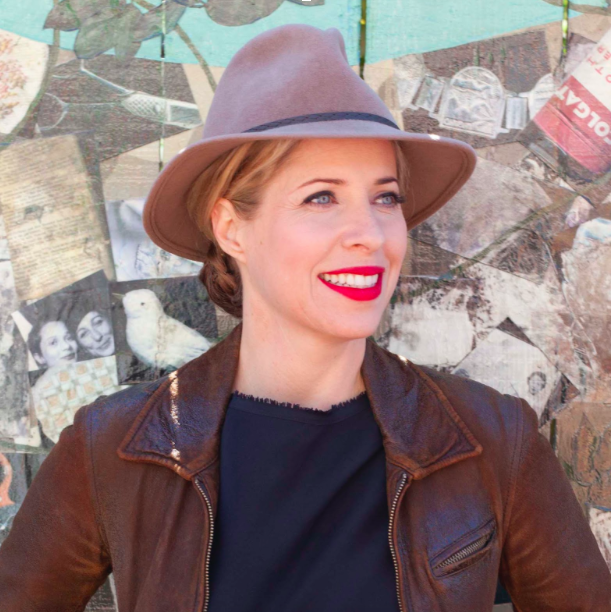 Honored by Newsweek as one of the “Women Shaping the 21st Century,” Tiffany Shlain is a filmmaker, public speaker, writer, founder of The Webby Awards, and co-founder of the International Academy of Digital Arts and Sciences. She has been invited to advise former Secretary of State Hillary Clinton, and the US State Department uses her films to represent America at embassies around the world.

A sought-after keynote speaker known for her visual and inspiring presentations, Tiffany lectures worldwide on the Internet’s influence on society, the creative process, innovative filmmaking, and what the future may bring in our ever-increasingly changing world. Using her award-winning films as an integral part of her talks, these interactive events have been described as live film experiences and have opened and closed major events around the world. She has delivered talks at Harvard, NASA, Twitter, The Economist Big Ideas conferences, Fortune 500 companies, The Ideas Festival, Apple theaters in NYC and SF, the 92nd St Y in NYC, MIT, The Sydney Opera House, and several TED events including as the closing speaker for TEDMED & TEDWomen that was broadcast globally. Tiffany received a standing ovation from 11,000 people after she delivered the keynote address for UC Berkeley’s commencement ceremony in May 2010. NPR included this commencement speech on their list of “Best Commencement Speeches, Ever.” Her talks and films have been viewed over 50 million times.

Tiffany’s films have been honored with over 80 awards and distinctions including an Emmy nomination and Audience and Grand Jury Prizes, and a Disruptive Innovation Award from The Tribeca Film Festival. Her films have been shown at museums, theaters, conferences, festivals, and by the US State Department to represent America at embassies around the world, and are known for their irreverent and profound unraveling of complex subjects like identity, technology, and science.

Nominated for a 2014 Emmy Award in the category of New Approaches: Arts, Lifestyle, Culture, The Future Starts Here takes audiences on a wildly entertaining and inspiring ride, exploring what it means to be human in our increasingly connected world. From the latest neuroscience on daydreaming to the evolution of social media to new perspectives on creativity, diplomacy, gender, and the future of our species, Shlain uses her signature style of fast-paced images, colorful animations, and daring and funny insights to encourage everyone to think about where we’re headed in our increasingly connected world. The series is one of AOL’s top shows with over 40 million views. Both Seasons are available at futurestartshere.com.

Tiffany is currently working on a film series which employs a new kind of collaborative filmmaking she and her film studio call “Cloud Filmmaking.” The series, titled “Let it Ripple: Mobile Films for Global Change,” includes short films about the aspects of life that connect all of us. Each of these films is made collaboratively by inviting people from all over the world to send in their own videos. Then once the film is complete, it’s available for free customization for any nonprofit or school. She published a “Cloud Filmmaking Manifesto” for the Tribeca Institute Future of Film blog that outlines what constitutes a “cloud film.” The first film in the series, A Declaration of Interdependence, with music by Moby, was released September 2011 and has been volunteer-translated into 67 languages. The second film in the series, Engage, looks at the importance of engaging in society — The third film in the series is both a 10-minute film and a TED Book, called Brain Power: From Neurons to Networks, which looks at new research on how to best grow children’s brains and applies this to thinking about the best way to grow the global brain of the internet. The Brain Power TEDBook hit #10 book in neuroscience on Amazon in its first week and the film was selected by the US State Department to be part of the 2013 American Film Showcase and screened at embassies in the middle east in November 2013. The fourth in the series, The Science of Character, focuses on the neuroscience and social science of how ones “character” develops. The Science of Character had a global film premiere and screened on the same day at over 1500 nonprofits and schools around the world. It will be Tiffany’s third film invited to be part of the American Film Showcase. The fifth Cloud Film, Free Speech, was created in partnership with UC Berkeley and was screened on Oct 1, 2014 as part of the 50th Anniversary celebrations held to commemorate the beginning of The Free Speech Movement. The team just organized the second annual #CharacterDay on Sept 18th where they had global film premieres of their two new cloud films “The Adaptable Mind” (11mins) and “The Making of a Mensch.” There were over 6700 live screenings of these films in 41 countries at schools, classrooms, theaters, libraries, museums all unified by a Global Google Hangout with discussions over a 24 hour time zone. Tiffany was invited to share this pioneering approach to filmmaking & distribution as the keynote for Tribeca Film Festival’s 2013 Interactive Day.

Tiffany has had four films premiere at Sundance, including her acclaimed feature documentary, Connected: An Autoblogography about Love, Death & Technology, which The New York Times proclaims as “Incredibly engaging… Examining Everything From the Big Bang to Twitter.” The US State Department selected Connected as one of the films to represent America at embassies around the world for their 2012 American Film Showcase. Connected had an 11-city theatrical run, its TV broadcast premiere on PBS KQED, and is now available on iTunes, Amazon, Netflix and all digital platforms.

Her earlier films include Life, Liberty & The Pursuit of Happiness, about the importance of reproductive rights in America, that premiered at Sundance in 2003, and has been used by reproductive rights organizations since. The film re-released in 2012 during the presidential elections. The Tribe, an exploration of American Jewish identity through the history of the Barbie doll, continues to be used as a teaching guide and was the first documentary short to become #1 on iTunes. Yelp: With Apologies to Allen Ginsberg’s Howl, about our addiction to technology and the importance of occasionally “unplugging,’ premiered at Sundance 2011 and was selected as a finalist for Guggenheim Museum & Youtube’s YouTube Play: A Biennial of Creative Video.

Tiffany founded The Webby Awards in 1996 and was creative director and/or the producer for nearly a decade, honoring the best the web in its first decade and establishing the Awards into a global organization honoring the best of the Internet. The Webbys receive over 13,000 entries annually and are now presented in NYC. The 21th Annual Webby Awards will be spring of 2017. She was asked by CNET to write her perspective 20 years later. She co-founded The International Academy of Digital Arts & Sciences, today a 550-person organization, and served as the judging body along with the popular vote. During her time with the Webbys, she served as the on-air Internet expert for Good Morning America from 2000 to 2003 where she would do live on air conversations with Diane Sawyer and Charlie Gibson about how the Internet was changing our lives. Under her leadership, The Webbys were hailed the “Oscars of the Web” by the NYTimes and the “It Award Show” by Vanity Fair. She co-produced and directed theatrical productions of The Webbys to sold out audiences up to 3000 people at venues including The San Francisco Opera House. Master of Ceremonies included Alan Cumming, special guests Al Gore, Prince, and Thomas Friedman. In the founding year, Shlain instituted the five word acceptance speech, which is still followed to this day. Her work with The Webby Awards has been profiled in all major publications, television shows, and radio shows. After a decade with the Webbys, in 2006, Tiffany wanted to return to her passion of making films and using the power of technology to tell stories in new ways to make change in the world.

Tiffany Shlain opened her film studio and lab, The Moxie Institute, in 2006, and has since gone on to create films, books, theater experiences, and Internet experiments around social issues using emerging technologies. Her team currently has numerous films playing in festivals, conferences, television stations, and on the web and has a film in production. The Moxie Institute films and discussion programs have been used in many diverse settings to spark dialogues about social issues, including universities, conferences, governments, and entertainment settings. They have been singled out by The New York Times, Variety, The Hollywood Reporter, and The Sundance Institute for their cutting-edge work using documentaries and Internet distribution in unique ways to engage audiences. She has received over 80 awards and distinctions during the course of her career for her work as a filmmaker, artist, Internet advocate, leader, and activist.

Tiffany is a graduate of the University of California Berkeley where she was selected as a valedictorian speaker for the interdisciplinary studies department and received the highest honor in art, The Eisner Award, for filmmaking. She received her BA in film theory in the interdisciplinary studies department in 1992. She studied organizational change at Harvard Business School Executive Education program and film production at New York University’s Sight & Sound program in 1990. Tiffany is a Henry Crown Fellow of The Aspen Institute.

She served on the board of The Commonwealth Club of California, on the advisory boards of The UC Berkeley’s Center for New Media, The San Francisco Film Festival’s Filmmaker Advisory Committee, Web 2.0, The Fledging Fund, on the transition teams for San Francisco Mayor Gavin Newsom and California Attorney General Kamala Harris, on a multi-university Leadership Committee which oversaw a global research partnership that includes the MIT Engineering Systems Division’s Geospatial Data Center, Harvard Kennedy School’s Center for Public Leadership, the Oxford University Centre for Corporate Reputation at Saïd Business School, UC Berkeley’s Center for New Media and others working towards the transparency and security of data to effectuate positive social change. She was a member of the advisory board for The Institute for the Future, and was invited on a flight from SFO to London by British Airways and the United Nations to brainstorm world problems, and invited to a small convening in DC to advise Secretary of State Hillary Clinton on technology and society.

Tiffany has written a quarterly newsletter since 1998 that highlights films, books, events and happenings around the world called “Breakfast @ Tiffany’s” and contributes to publications including Harvard Business Review, Documentary Magazine, Huffington Post, Tribeca’s Future of Film and Good Magazine. Fast Company listed her as one of the “Twitter stars to follow.” The Library of the Academy of Motion Picture Arts & Sciences has the script for Connected as part of their permanent Core Collection. She has co-written 27 screenplays and a TED Book, Brain Power: From Neurons to Networks.

Her latest art show opened at The National Museum of American Jewish History Dec 14, 2016 where she was an artist-in-residence with her husband and collaborator Ken Goldberg. They premiered their new film The Whole Cinemagillah. Her art installation The Brain Portrait premiered at UCSF’s Sandler Neuroscience Center in March 2014. Her video art installation, “Smashing,” with artist and husband UC Berkeley Robotics Professor Ken Goldberg, premiered at The Contemporary Jewish Museum in SF and showed at the Pulse Contemporary Art Fair.
Tiffany and her husband have two children and live in Northern California.